Home Drupal Development The Difference Between Drupal 9 And Drupal 10 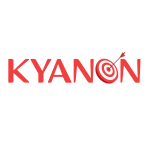 Kyanon Digital
December 22, 2021 0 Comments
Drupal is undoubtedly an outstanding open-source CMS platform, offering flexibility, speed, rigorous security, and scalability for organizations of all sizes across all industries. This is why today there are over 1 million users across the globe that rely on Drupal. Now, the buzz amongst the Drupal community is around the upcoming version, Drupal 10. Drupal 10 is targeted to release in June 2022, with the slight possibility of getting backdated to the end of 2022. Drupal 9 was launched in Jun 2020 and there are at least 2 micro-versions that are scheduled between now and the arrival of Drupal 10. November 2021 marked the end-of-life for Drupal 8. These milestones make the launch of Drupal 10 more significant. Let’s explore some of the key features of Drupal 10 and see how it’s going to be similar and different from Drupal 9. It’s interesting to note that the wait time between Drupal 7 and 8 was longer, about 4-5 years, but the release time between versions 9 and 10 is going to be much shorter. Just like how Drupal 9 got built on Drupal 8, Drupal 10 is an evolution from Drupal 9 with a few reinvented features. In other words, Drupal 10 may well be similar to the latest version of Drupal 9 with some updated dependencies and deprecated code removal as exceptions, a usual strategy from Drupal for enhanced compatibility. So the revolutionary changes we witnessed in Version 8 are not to be expected. The adoption rate for Drupal 9 was faster than any other version of Drupal and the modules are ready faster than ever before. If you are wondering about Drupal 10, this is what Drupal’s Founder Dries Buytaert  had to say: “The big news here is that the upgrade to Drupal 9 was already easy, but the upgrade to Drupal 10 will be even easier.” This is just to say Drupal is only becoming more user-friendly with each version update and websites are getting built at a much faster rate. The new functionalities of Drupal 10 are actually up and running on Drupal 9 releases, so the module developers can readily install their APIs. Along the way, redundant code gets truncated breaking the backward compatibility, yet the module developers get a chance to keep abreast of the upcoming API changes, thus facilitating easier upgrades. Clearly, there will not be any last-minute surprises or unexpected changes on Drupal 10 given its strong identity with the last D9 version. 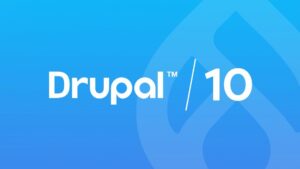 2. The key features of Drupal 10, in comparison with Drupal 9

Before we dive into Drupal 10, this is what the ambassadors of Drupal 2021 readiness initiative Kirsten Pol, Gabor Hojsta, and Lauri Escola stated in their keynote speech at the DrupalCon North America 2021: “Drupal 10 will be a refined version of Drupal 9 including all the goodies from all initiatives. It will include Olivero, Claro, all the work from the Automated Updates Initiative, Bug Smash, Easy Out-of-the-box, Decoupled Menus, and the Project Browser if we have one in time. So it will include all of the results of all the work that the community put in.” The structural features that are in the older versions including the ones in progress on Drupal 9, will also be part of Drupal 10. These include: 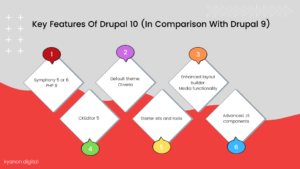 However, the biggest setback for Drupal 9 is its dependency on Symfony 4. With its road ending in late 2023, it will also mean the end-of-life for Drupal 9. This became one of the major drivers of the Drupal 10 timeline.

Drupal has conducted surveys and collected feedback from Drupalers and selectively come up with 5 major initiatives that they have been rigorously working on: Updating Drupal sites over the years has been a nightmare for novice site builders. Luckily, updating to Drupal 9 was easier with the help of its composer. For Drupal 10 it’s going to be automatic and fully secure, as long as the installation is compliant. Like many other platforms, Drupal can now address the risks and problems associated with automatic updates. The ultimate goal of this initiative is to assure a safe and secure automatic update for Drupal websites. It’s more applicable for SME site owners, rather than the large enterprises with custom-built workflows. 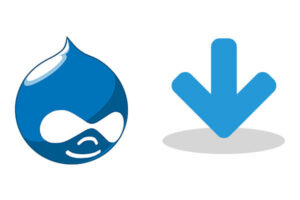 Claro, as a brand-new administration theme alongside the layout builder and media library with work in progress, is to be expected out of the box with D10. There is also a lot under the hood that doesn’t really impact the site builders heavily. A fair bit of work has to be done on layout builders to make it usable, but a large amount of additional contributed modules will be filling these gaps. Essentially, it makes life easier for web administrators, editors, and site builders in terms of media & content management, admin interface, and creating exceptional layouts on the web pages. Hence these tools will get a lot of attention, as backed by the survey conducted amongst the Drupal users. The decoupled menus initiative applies to those who use Drupal for headless architecture. Javascript projects are now possible on Drupal, since the menu components created and proven proof of concept have been made. The objective is to create the best possible way for front-end Javascript to consume Drupal’s configurable menus through a common JS library. The changes and additions to Drupal APIs are progressing along with the documentation of the solutions. This branching out to the Javascript world is revolutionary for Drupal to establish itself as one of the platform leaders in the headless segment. There are official react and vue components for menus, and developers will get a better experience than that of the content-full, modern headless CMS. The tool features authorizations and permissions and content creators can freely make changes to menus through the UI, without the involvement of coders, and the changes get reflected on the Javascript front-end. The twig templates are still maintained to facilitate the traditional websites. 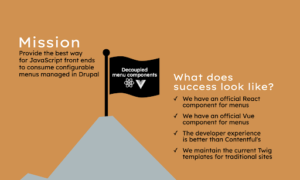 The modern and beautiful-looking Olivero that started as an experimental front-end theme in Drupal 9.1, will become the default one for D10 replacing the Bartik. The main focus is on designing a theme that will look dynamic for all age groups. Hence the design elements (shadows, gradients) are not extensively used and the text, animation, and color palettes are carefully selected. The theme also intends to feature second-level navigation as well, besides the inbuilt media and layout builder. The Drupal accessibility team will ensure the theme gets through high standards with the finest of details. A lot of work is being done as part of the Drupal readiness initiative. The idea is to ensure that there is enough time for users to update sites and even to guide the module maintainers along the way, as we switch to the newer versions across PHP, Symphony, and the composer. The work is in progress on Symphony 6, CKEditor that’s going through a hard migration with API changes and the JQuery UI removal. The one-off aggregator module of Drupal 9 will become dysfunctional in Drupal 10. Drupal has been keeping up the momentum of this activity to ensure that it uses the latest secure components in order to meet the finish line in June 2022. This initiative is what becomes the key factor that determines the postponement of D10 to the end of 2022. It’s highly recommended that Drupal users join the Drupal Slack meetings (#d10readiness) at 6 PM GMT, Mondays bi-weekly. 4. Getting ready for Drupal 10

If you are currently running Drupal 9, it would be very useful to start automating processes in alignment with Drupal 10. Converting to the Drupal-reactor helps since there are various APIs covered. Keep in mind that Drupal 9 is scheduled for a November 2023 shutdown, which sets the Drupal 10 upgrade time-frame between the end of 2022 and 2023. There is still uncertainty around CKEditor which will be updated to version 5 and there is a possible issue with data compatibility during the transition. Organizations must keep such things in view, as they head towards the Drupal 10 upgrade in the near future. Essentially, the tools and processes to adapt to preparing for this upgrade are going to be similar to that of the previous version. At Kyanon Digital, building custom solutions around Drupal CMS is one of our core specializations. We have, on a number of occasions, helped several organizations roll out and smoothly upgrade to the latest versions. If you are anticipating using Drupal 9 or Drupal 10 and need assistance on gearing up for the upgrade, your search for a reliable Drupal development company has just ended! Simply fill out the contact form and our consultants will reach out to you as soon as possible. 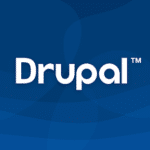 Next Article Overview Drupal For Ecommerce – All You Need To Know